Hodgson Downs Community/Minyerri, Northern Territory: If you drive about 270 kilometres south-east of Katherine towards the Hodgson River you’ll arrive at the remote community of Hodgson Downs, also known as Minyerrri.

It may be remote but there’s an energy and activity about this place.

Alawa Aboriginal Corporation is the community-controlled body that represents the interests of local residents and last year turned over almost $5 million in revenue.

About 650 people live in Hodgson Downs which has a couple of shops, a school, a health centre, a women’s centre, a post office, a police station, an oval and an airstrip. It also has wadabirr billa pul—the first children’s water park built in an Aboriginal community. 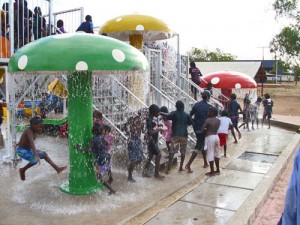 In Alawa Kriol wadabirr billa pul means ‘goanna billabong’ and since its opening in July 2012 there have been noticeable health benefits for the community and a great deal of fun! ‘The children love the water slides,’ said Ken Muggeridge, CEO of Alawa Aboriginal Corporation. ‘They’re getting lots of exercise and because the water is chlorinated they’re not picking up rashes and illnesses—which was the case before when they were swimming in dirty river water.’

Minyerri School (also known as Hodgson Downs-Minyerri School) is at the community’s centre and, over the years, it has consistently turned in high attendance rates. ‘A reason for this is that no student lives further than a kilometre away and so no one has far to travel,’ said Neil Gibson, the school’s principal. Another reason is the continuity and care shown by the teaching staff, whether in the classroom, at community events, or out on the playing field.

Young people growing up in Hodgson Downs are encouraged to extend their boundaries and to learn new skills. It’s all about having a ‘can do’ attitude. The training shed, built by members of the community through an accredited training course (Certificate II in Construction) is just the latest example.

Interest is now on the internal fit-out. Work is almost finished and the result is fantastic.

Having a purpose-built shed available makes it possible to bring in both accredited and non-accredited training courses to the local community, and to offer mentoring opportunities and a chance for personal development.

‘I see this newly kitted-out shed very much as a place where we will all work and share together,’ said the chairman of Alawa Aboriginal Corporation, Clive Roberts. ‘We’ll enjoy ourselves but we’ll also develop life skills, grow as individuals and, at the same time, learn motor mechanics, how to weld and even how to build houses.’

The Australian Government has contributed $100,000 from its community development fund to make the upgrade possible. The grant was given to Alawa Aboriginal Corporation late last year.

The Minister for Indigenous Affairs, Nigel Scullion, said, ‘When fully operational, the facility will be used as a multi-purpose training centre. This will help to give Hodgson Downs’ residents the skills necessary to take up employment opportunities in and around the Ngukurr/Numbulwar region.’

This is the main intention. The Brahman cattle industry at nearby Hodgson Downs Station provides some local employment but the time is now right for creating further job opportunities and greater diversity.

‘We couldn’t be more pleased with how well this project has come along and it’s of course good news for the Hodgson Downs community that the doors of the training shed will soon  be open,’ said Clive Roberts. ‘I know everyone is keen to get started.’

The first children’s water park built in an Aboriginal community. The Hodgson Downs community and Alawa Aboriginal Corporation are delighted that the water park is providing fun and exercise for the children as well as bringing about many health benefits. (Photo: Courtesy of Nine News 12 July 2012: ‘Water park opens for kids in remote territory community’)

The water park was constructed through a contribution from the Australian Government but mainly through funds raised by the community.