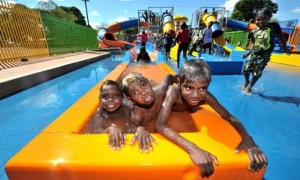 IT SEEMS like a strange thing – a new water park in a remote NT community.

And among the steel houses and dust, the splash of bright colours stands out like the proverbials on a camp dog.

Alawa Aboriginal Corporation chief executive officer Ken Muggeridge said it was there for the health benefits – and the fun.

“It is the first one to be built on an Aboriginal community and I’m sure it will not be the last,” he said.

“Hodgson Downs community is a community of 540 indigenous people the water park was 3 years of hard work for the community to put together. While the Federal Government contributed $85,000 towards building the park the people of Hodgson Downs contributed around $400,000 of their own money so the tax payer only put in a small amount of the money needed to build the park and many people of the community are also tax payers. What % of Gov funding was Palmerston and Leayner water parks.”
Ken Muggeridge

“There’s some people who said if it was their decision they never would have funded the park.”

“I’m glad, we’re really lucky, that those people didn’t have the decision.”

They are spread by swimming in the billabong.

By 7am yesterday, kids were nagging for the tiny pool-less park to open – but had to wait for the pollies and media to roll in.